Resistors:
Resistors are not polarity sensitive unless you need to worry about the direction of change on a variable unit. Actually that is not really a polarity problem, just an orientation problem. Resistors may be marked with numeric values, but most often they will simply be banded with colors to indicate their value. That probably is the most prevelent cause of frustration, as some colors may be very difficult to distinguish from others. This can be especially difficult if you get resistors from different places. One manufacturers orange may be very close to another one's red or brown.

Once you learn the color code (which basicly follows the colors of the rainbow with some extras at each end) you still need to figure out which end to start reading from. Some resistors will have a wider space between one of the end bands and the rest of the bands. In the example following (fig.1) there is a greater space between the black and gold bands. If this is the case, then the space goes to the right when you are reading the value. Gold or silver is never used for the first two bands, so if there is a gold or silver end band it will always be the tolerance, and face to the right. For 2% resistors the tolerance (last) band is red, so you must take extra care to observe the spacing of the bands. One percent tolerance resistors have 5 bands and the last one (following the space) will be brown. If there are only 3 bands, then you have a 20% tolerance resistor, and the code starts from the band closest to the end of the resistor.

In this next example (fig 2.) all the bands are equally spaced, but they are all close to one end of the resistor. If this is the case, then you start reading from the band closest to one end.

In this top view (Fig 4.) I have bent out the terminals to be visible. Normally they are under the pot. In this example, turning the pot clockwise moves the wiper to the right in the schematic. The numbers corespond to the numeric values of the color code. This example's value is "103" or 10 followed by three zeros, or 10K ohm. If the imprinting had said "10K" or "1.5M" or "50ohm", then it would be the actual value. 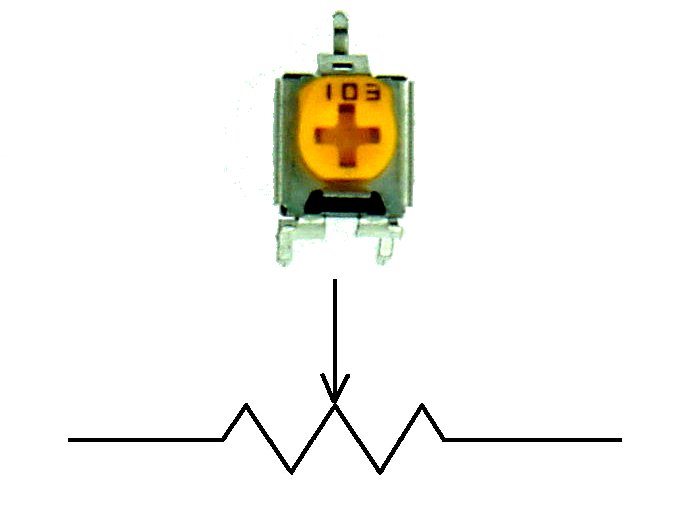 Resistors are power rated in watts. Common ratings range from 1/8 W to 2 W in doubling power increments. (1/8, 1/4, 1/2, 1, and 2) The higher power ratings require much more than a doubling of surface area to double the rating, so a 2 W resistor is much more than 16 times as massive as a 1/8 W unit. Even higher power resistors are available, but they are usually made of ceramic materials and wire, and will get very hot at their full rated power. Be sure to design your circuit to provide plenty of air flow, or else clamp the power resistor to some large block of metal to carry away the heat. It would be easy to melt a hole in a plastic engine shell using one of these power resistors. (If that is what you want to do.) <grin>